"Our purpose is to advance and disseminate the technology of adaptive optics to serve science, health care, industry, and education."

Stars twinkle at night because air currents in the atmosphere cause aberrations in the transmitted light waves causing the images to vary with time (twinkle). Until recently, because of these same aberr-ations, astronomers have been limited to obtaining fuzzy images of distant astronomical objects viewed through land-based telescopes. Similarly, vision researchers have been unable to obtain sharp images of the living retina because of blurring caused by the medium through which the light passes. The National Science Center for Adaptive Optics is dedicated to development of the technology that will automatically compensate for the aberrations causing the loss of image quality, thus enabling a new era in astronomy and human eye research and vision correction.

Adaptive optics utilizes a high speed computer to actively compensate for the changing distortions that cause blurring of images. Additionally the system requires precision optics, special sensors and deformable mirrors, as well as a point source of light for use as a reference beacon to measure precisely the distortion created by the atmosphere (or for the eye, the internal imperfections and fluids in the eye). The amount of distortion is determined and an "adaptive optical element," usually a deformable mirror under computer control, is used to cancel the effect by applying an opposite distortion. In astronomy, such corrections are applied hundreds of times per second, because the adaptive optics faint objects can be imaged with long exposure over time. However this necessitates a bright "reference 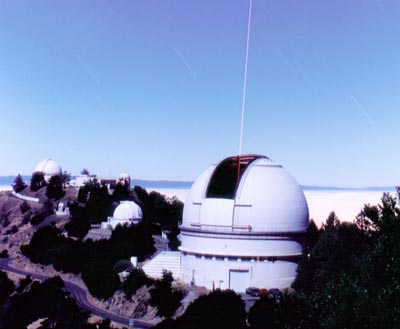 beacon" nearby the faint object to enable the AO system to analyze and correct for atmospheric effects. This beacon can be a bright natural guide star located in close proximity to the faint system being observed, or an artificial "bright star" created by using a laser beam that causes sodium ions in an upper atmosphere layer to flouresce. The photo on page one shows the laser beam at the Lick Observatory, Mt. Hamilton, California.

A current major drawback is that adaptive optics corrects only for a small patch of atmosphere at the center of the telescope's field of view ­ that through which the guide beacon light travels. However, the "faint object" being studied is at a slightly different viewing angle. The pockets of atmospheric turbulence are small enough that such a slight change in viewing angle could mean a whole different pattern of distortions than those for which corrections are being made. Nevertheless, despite this limitation and while improved techniques are being considered, current AO systems have yielded high quality images rivaling those obtained by the Hubble space telescope.

Relative to Space Telescopes, land based AO telescopes are larger and much less expensive to build and operate. For comparison "Hubble" cost roughly twenty times more to build and launch than the land based Keck Adaptive Optics telescopes, yet Keck has 20 times the light gathering area and potentially 4-5 times better resolution. This is not to say that space based telescopes have been rendered obsolete. There are certain wavelengths which cannot be measured from land based AO telescopes and in fact, the two systems are complementary.

The AO used for vision systems is very similar to that in astronomy. The point light source (reference beacon) is a laser beam reflected off the retina and distortions in the wave front caused by the eye components are detected and compensated for by a deformable mirror or some other "adaptive optical element". AO promises to provide new tools for the diagnosis of eye disease - see figure, as well as improving the correction of vision via laser surgery and contact lenses.

The Center for Adaptive Optics, is headquartered at the University of California Santa Cruz (UCSC). It was established in 1999 by a $20 million, five-year grant from the National Science Foundation's Science and Technology Centers Program. The Center conducts research, educates students, develops new instruments, and disseminates knowledge about adaptive optics to the both the scientific community and public. The Center is a consortium of eleven institutions - research universities and a national laboratory. It interacts with over 20 partner institutions located throughout the U.S. The Center's administrative headquarters is currently being built on the UCSC campus and will house faculty, visiting scientists, and administrators. A state-of-the-art video-conferencing facility is planned that will enable direct communication with center affiliates located anywhere in the US.